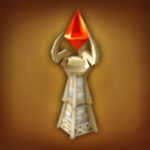 The Arcane Tower will do Damage to your Enemies when defending your Land! While the Battle is progressing, the Arcane Tower Damage will become more and more frequent and will be stable at a certain number of turns!