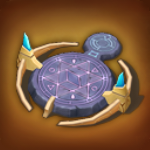 The Building Power-Up Circle is one of the Main building! Its our Monster Power-Up & Evolve Building! Where we can Power-Up and Evolve our Monsters!

Power-Up a Monster mean raising he's Experience by sacrificing other none wanted Monsters (up to 5) in order to raise the Monster Level! Making them more Stronger and reach the Maximum Level of the current Grade! There's a 20% chance to gain 1.5 times the normal amount of experience! It cost Mana Stones, the amount depend on the sacrificed Monsters Grade!

Evolve a Monster mean to change he's Grade into the next one by sacrificing other none wanted Monsters of the same Grade in order to raise the Monster Grade! Making them less Stronger at the change, but will become a lot more Stronger when reaching the same previous Level! Maximum Grade for any Monsters is 6 Stars! It cost Mana Stones, the amount depend on the Monster Grade!

The Power-Up Circle offer to Power-Up our Monsters! It can be use for 2 different task:

The number of Experience gained to a Monster when Power-Up will depend on the sacrificing Monsters Grade and Level.

Also, there's a Special Dungeon, named the Angel Garden, that is offered by Com2uS as Event. When the Event is available and during the right Hours, an Angel Garden of a certain Element will open he's doors for 1 Hour! During that Hour, any Player can fight the Giant Angelmon in 3 different Base!

According to Experience, Angelmons is the Monster that give the most Experience for he's Grade and Level and it give even more Experience when Awakened and used to Power-Up Monster with the same Element! It's very important to raise any Angelmons to MAX Level, because it will give A LOT more Experience! Awakened provide 50% More Expy to the same Element, however, using it on a different Element will not give the 50% Bonus! It's like using a Un-Awakened Angelmon!

King Angelmons is a Monster Material that can be obtained as a Reward when rolling our chance in the Temple of Wishes. They can also be purchased with real life money in the Shop > Special Pack!

King Angelmons are like the Angelmons except they give 2 times the Experience!

(I think they are always at MAX Level)

The Power-Up Circle offer to Evolve our Monsters to the next Grade!

In order to Evolve, the Monster need to have reach he's MAX Level of the current Grade and then it need to sacrificing order none wanted Monsters of the same Grade (can be any Level).

During the Evolve, it's possible to use the same Monster Kind to also raise the Skill of the Evolve Monster!

The Power-Up Circle can be used to Raise the Skill on Monsters! There's 2 ways to do it:

When using the same Monster Kind, it's possible to use them at Power-Up or during Evolve! Also, if the Monster is already at Maximum Level 40 Grade 6 Stars, it can still be Power-Up to raise Skills! It's not obligated to use the same Grade or Level! It exist some Monster that naturally come into different Grade then their other Element Kind! (Fairy: Water, Fire, Light and Dark are Grade 3 Stars but Wind is Grade 2 Stars!)

According to Devilmon, it's very important to understand that finding Devilmon is hard! So, it's better to use them on Natural 5 Stars Monsters or sometime Natural 4 Stars!