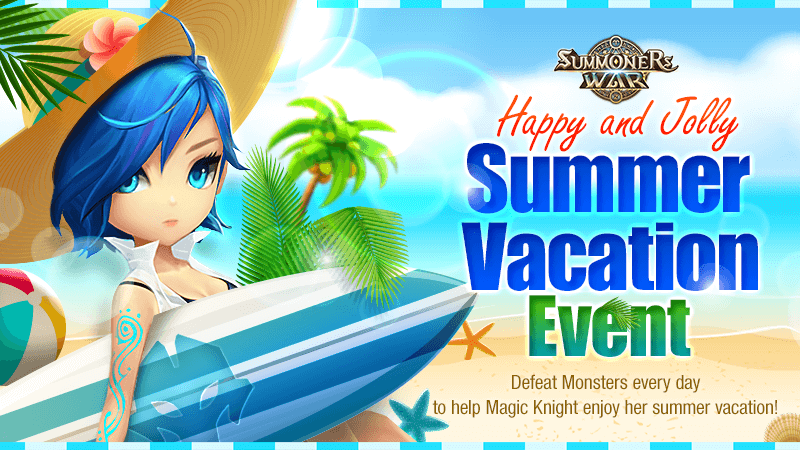 EVENT 1. Defeat Monsters Every Day
Defeat Monsters in Scenario/ Cairos Dungeon/ Dimension Hole every day!
Rewards will be given every day according to the no. of defeated Monsters today.
- 700 Monsters: 50 Energy + 100,000 Mana Stones
- 1,500 Monsters: 1 Mystical Scroll or 50 Crystals (Each item is available up to 7 times)

* You can choose either Mystical Scroll or Crystals to claim every day. (Each item is available up to 7 times)
* [No. of Monsters defeated today] will reset every day at 8am PDT, and rewards are available once a day.

EVENT 2. Defeat As Many Monsters As You Can
Get rewards according to the no. of Monsters you defeated!
Defeat Monsters for an amazing summer vacation!

* Please Read
- The no. of Monsters you defeat in Scenario/Cairos Dungeon/Dimension Hole will be recorded at the event page in real-time. (Secret Dungeon/ Hall of Heroes/ Dimensional Rift excluded)
- For the No. of Monsters Defeated Today, up to 3,000 defeated Monsters will be recorded and the record will reset every day at 8am PDT.
- For the reward that's given for defeating 1,500 Monsters every day, you can choose either Mystical Scroll or Crystals to claim every day. (Each item is available up to 7 times)
- The reward will be available for 24 hours after the event ends.
- Please restart the game if you're playing when the event begins to avoid any delays.
- Please try restarting the game if you don't see your reward at the Inbox.
- The duration and remaining time for the event will be displayed in the time zone of the area that you reside in.
- For questions or customer support, please contact our Customer Support by visiting http://www.withhive.com/help/inquire.