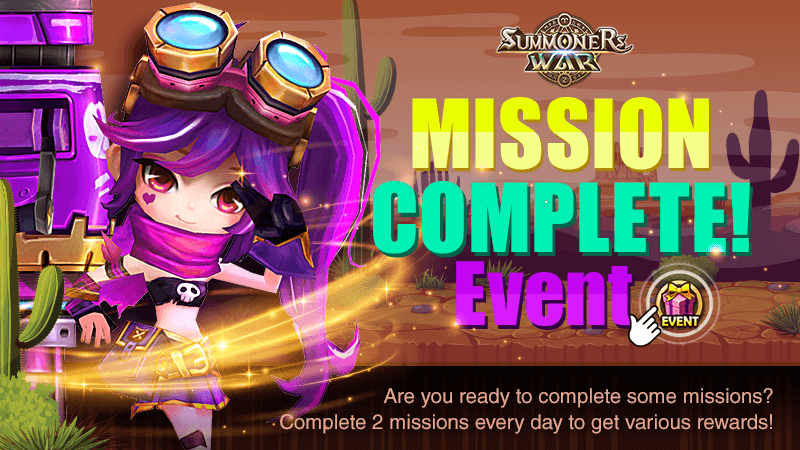 Please see below for more info on the MISSION COMPLETE! Event.

> EVENT 1
Are you ready to complete some missions?
Complete 2 missions every day to get various rewards!

> EVENT 2
Get rewards based on the no. of mission completions from [Mission 1] and [Mission 2]!

* Please Read
- You can complete Mission 1 and Mission 2 once a day.
- [No. of defeated Monsters (Today)] and [No. of entries in the Arena & Guild Battle (Today)] reset every day at 8am PDT and the reward is available once a day.
- [Total no. of mission completions] count will go up whenever you complete Mission 1 or Mission 2 from the Event 1.
- All rewards from the [total no. of mission completions] are available only once per account.
- The rewards will be available for 24 hours after the event ends.
- Please restart the game if you're playing when the event begins to avoid any delays.
- Please try restarting the game if you don't see your reward at the Inbox.
- The duration and remaining time for the event will be displayed in the time zone of the area that you reside in.
- For questions or customer support, please contact our Customer Support by visiting https://www.withhive.com/help/inquire.